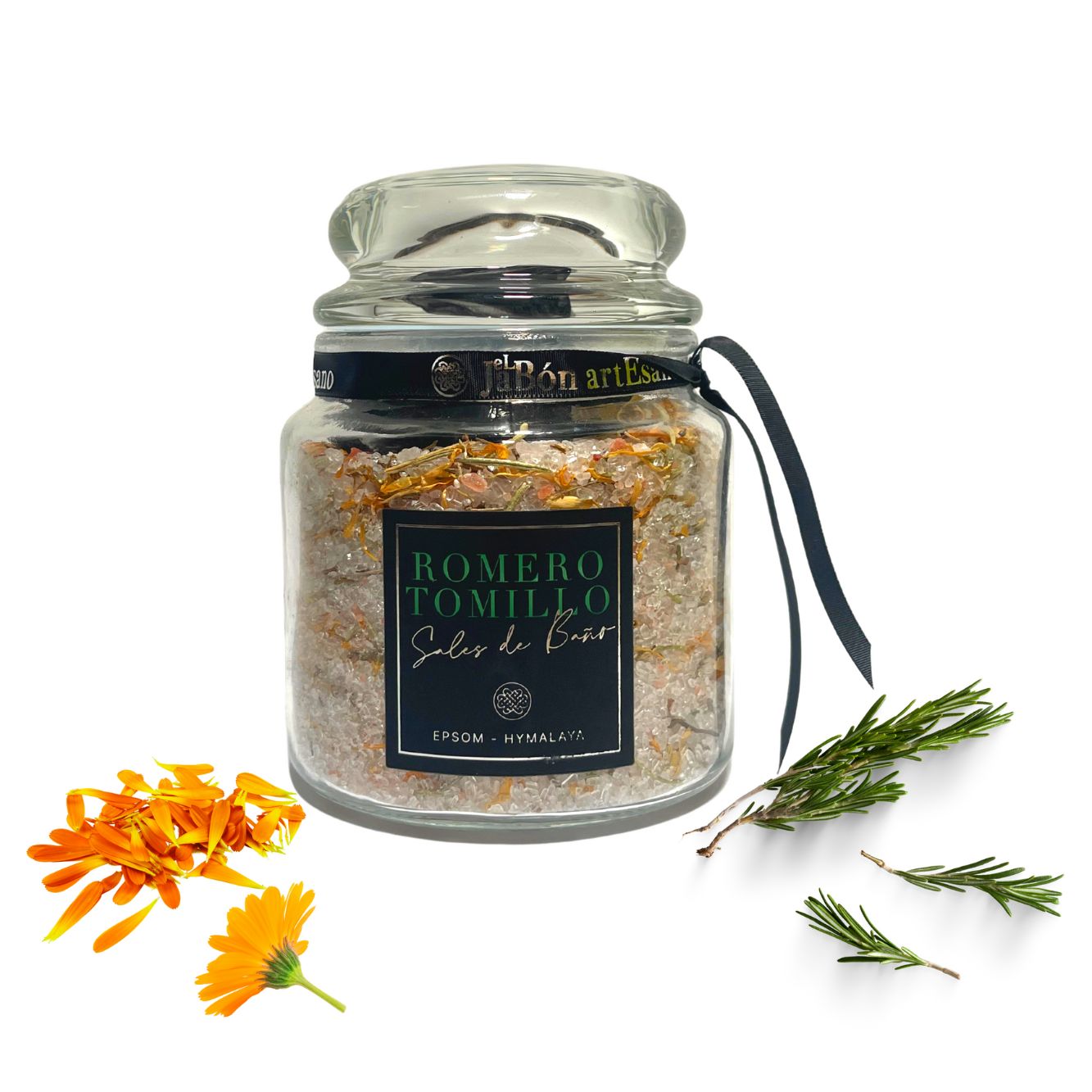 – EPSOM SALTS
Epsom salt is known scientifically as magnesium sulphate.
Medical benefits underline its anti-inflammatory properties.
It is absorbed by the skin when diluted in bath water and in this way it will also absorb toxins from the body.

– Remineralising, it brings its magnesium and sulphur richness to the skin.
– The size of its grains gives it a stimulating exfoliating power for the body while gently exfoliating.
– Combined with plants and essential oils, it promotes muscle relaxation thanks to its magnesium content (comfort for sportsmen and women).
– Helps to relieve joint pain, lumbago, sciatica, rheumatism, tendinitis.
– A healthy way to reduce stress, while promoting the elimination of toxins from your body and increasing cell renewal through exfoliation.
-It can help to let go and has a soothing and liberating role on the mind, which can promote sleep.

– Improves sleep
Oxytocin is a naturally produced hormone that helps you feel calmer and more relaxed to help you fall asleep faster.
– Improves libido
A low libido may be due to a lack of minerals such as zinc, magnesium and selenium. Pink Himalayan salt contains over 84 essential minerals, which can boost your stamina!
– Relieves muscle cramps
Ideal for soothing sore and painful muscles due to the high content of magnesium and other trace elements.
– Fights bloating and helps water retention
While Epsom salt baths are reputed to be effective in helping to combat water retention and stop bloating, what about those with pink Himalayan salt?
The salts help by extracting water (along with toxins) out of the body, which translates into a good help against orange peel skin on the thighs.
– Soothes stings and blisters
Antiseptic, antibacterial and anti-inflammatory, soothes insect bites and painful blisters.

– ADVICE FOR USE :
For a relaxing bath,
Add 8 tablespoons (+/- 240 gr) to your hot water bath ( 37°C).
Immerse for 20 minutes and let your body and mind relax.
After bathing, rinse off with clear water and prolong its effects by moisturising your skin with a rich cream or body oil .

Salt should be stored at a temperature not exceeding +25C, out of the reach of children.
Do not ingest

The origin of Epsom salt dates back to the 17th century, when people came to drink Epsom waters which was England’s first spa. These waters, rich in minerals, were essentially reputed to be purgative.

Commonly called Epsom salt, it is also known by its chemical name: magnesium sulphate. The term Epsom is a tribute to a town with exactly the same name in England where it was once used in harvesting.

The antiseptic and fortifying qualities were not yet known, but it was understood that in some way they were beneficial to health and promoted longevity. Later, it was discovered through various uses and experiments that Epsom salt could also be used to prevent sclerosis, kidney problems, rheumatism and also being overweight. It is now more frequently used externally in a hot bath to eliminate toxins and alleviate certain pains due to the imbalance of acidity in the body. A good bath therefore proves to be very beneficial in the recovery process after physical effort!

Nowadays, it is obtained from natural minerals, coming from underground deposits. Purification is then carried out by a physical process followed by recrystallization. Epsom salt has antiseptic properties that accelerate healing, restore tired muscles and promote general relaxation.

There are no reviews yet.

This website uses cookies to improve your experience while you navigate through the website. Out of these cookies, the cookies that are categorized as necessary are stored on your browser as they are essential for the working of basic functionalities of the website. We also use third-party cookies that help us analyze and understand how you use this website. These cookies will be stored in your browser only with your consent. You also have the option to opt-out of these cookies. But opting out of some of these cookies may have an effect on your browsing experience.
Necessary Always Enabled
Necessary cookies are absolutely essential for the website to function properly. This category only includes cookies that ensures basic functionalities and security features of the website. These cookies do not store any personal information.
Non-necessary
Any cookies that may not be particularly necessary for the website to function and is used specifically to collect user personal data via analytics, ads, other embedded contents are termed as non-necessary cookies. It is mandatory to procure user consent prior to running these cookies on your website.
SAVE & ACCEPT